Posted on April 6, 2013 by northwestphotos

The warm temperatures of the past weekend prompted me to head over the mountains to an even warmer spot … the deserts of eastern WA. Along the way, it was interesting to pass through various topographies—from snowy mountain passes, frozen lakes, conifer forests, to rolling scrublands—finally ending up along the Columbia River basalt cliffs. Such are the sights when traveling along Interstate 90 in the early months of spring. My final destination was Vantage, a small community 30 mile east of Ellensburg and the wind farms that make for picturesque scenery along the rolling ridges of scrubland.

Vantage is located along the Columbia River. Not much to speak of except for a couple of gas stations and a few small diners. But the main reason for a visit here is for the Gingko Petrified Forest State Park and Wanapum Recreational Area. Here, one can get some great views of the Columbia River and the Interstate crossing from atop the basalt bluff overviews. 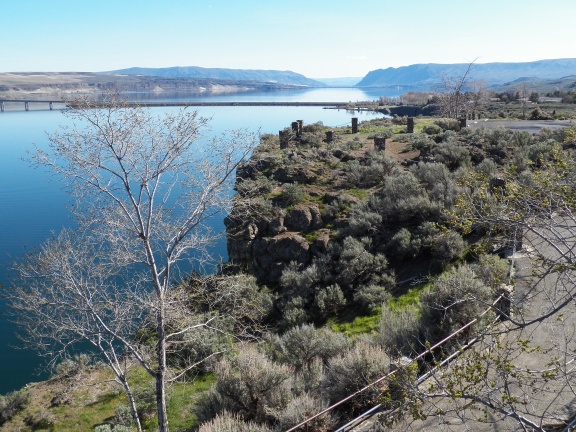 Just a short drive from the Interstate is the state park. But, just before the overlook and interpretive center, take a moment to stop at the Ginkgo Gem Shop. For you geology buffs, this is like a candy shop, full of many fantastic and beautiful fossils and gems … and, of course … petrified wood. Once a rockhound myself, I spent a lot of time in here. It brought back childhood memories of digging up trilobites and brachiopods in the fossil-rich area I lived in at one time. I felt so much at home here; I just had to take home something from my visit. After much debate with myself, I settled on a nice ammonite fossil specimen. As well, the shop is surrounded by many fine samples of petrified wood logs amidst a playground of make-believe prehistoric reptiles. 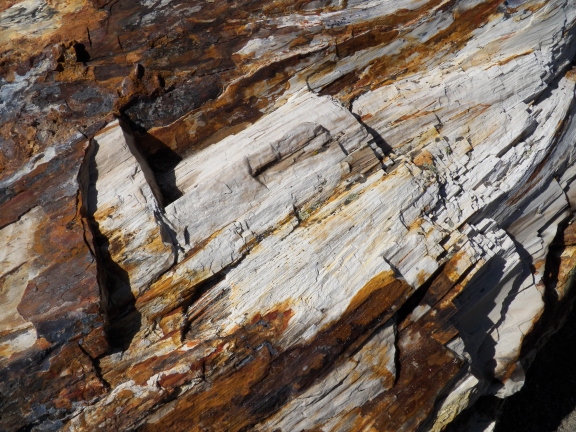 One can walk around the small interpretive center/museum to get fantastic views of the Columbia River, as well as an area of Native American petroglyphs carved into the cliffside. Below are a few photos of the very cool petroglyphs.

If you want to explore more of the petrified forest (Vantage Forest), drive 2 miles down the main road to an area that has hiking trails to view some specimens in the raw. It was here that the first petrified Gingko log was found in the early 1930’s, and with the help of the Civilian Conservation Corp and other volunteers, the park was developed. It is here that one can see the still standing, old ranger residence and interpretive center. In 1965, the park was designated as a National Natural Landmark. It contains some of the most diversified groups of petrified wood species in North America, such as ginkgo, spruce, gum, and walnut.

The trails are built into the barren hillsides of this now desert area. One would never know that there once stood a forest here many millions of years ago. Take a look at the surrounding area and you will see what I mean. Looks pretty desolate, doesn’t it? Be warned. It gets hot as hell here during the summer months, with no shade to escape the heat. As far as the petrified wood logs go, all of them accessible to the public have sturdy, metal cage enclosures built around them to keep vandals and souvenir seekers away. Unfortunately, this makes it very difficult to take photos of the specimens. But, as mentioned earlier, there are plenty of fine samples back at the main interpretive area of the park to take photos of.

The early spring is a good time to visit, as the area’s spring flowers are in full bloom. They  grow out of the hillsides, clinging to the rocks and making the desert landscape come alive with color. 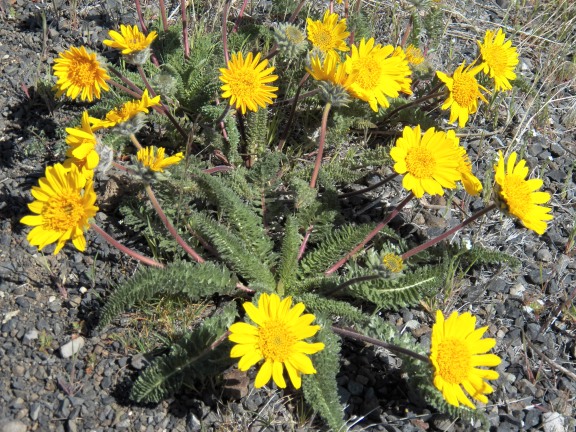 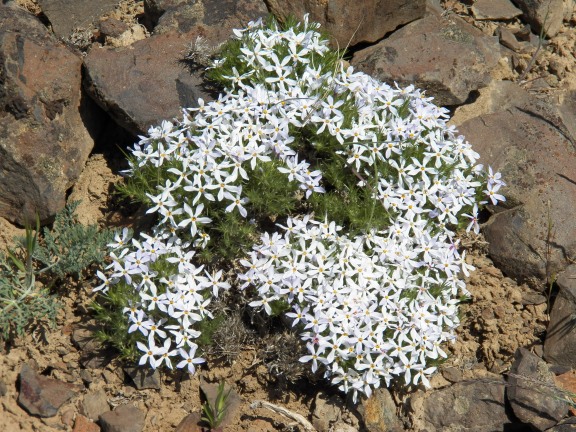 All together, there are more than 3 miles of trails along the hillside. Be sure to wear proper footwear and bring plenty of drinking water, as well as sun screen. And yes, there are the Western Rattlesnakes to be aware of. Stay on the trails … and … happy trailing!

All images property of Peggy A Thompson